The Ocean Ski event is the first of 2 crossings we have planned for 2015, the weather was perfect. A brisk south westerly force 5-6 had been picking up the swell all night, leaving a 2-3 meter westerly swell.

After an eventful passage out to the Scilly’s in the morning, the athletes on the world famous Scillonian III and the safety crews battling wind over tide in an flotilla of smaller boats, a trip which included do we don’t we pull the pin and cancel the event due to the safety boats not being able to reach the Islands, we converged on the quayside in Hugh Town.

Due to several “island time” delays the crews sorted themselves out and into the water, the 2 single skis and the girls doubles got underway 1.24pm, just under half and hour behind schedule. The two mens double crews left at 1.44pm and brought up the rear of the group as we paddled out into the Celtic Sea.

By the time the paddlers got out onto the water the wind had settled down to a steady force 4-5, still blowing from the South West. The swell remained in the 2-3 meter range and was pushing up from the South a little more than we had hoped but with a little zig zagging the crews managed to use both these natural aids and made steady progress out in to the channel.
As expected the mens doubles moved up through the field and arrived at Sennen first with Stan Missen & John Elliot becoming overall winners of the first Celtic Crossing, closely followed by Willem Prinslow and Martin Fleet in the second double ski. Scott Cuthbertson lead John O’Grady home in the single skis and bringing up the rear was the performance of the day from Katie Fielder and Keia Wardman the girls double crew. At 16 and 15 years old respectively they became the youngest people to have ever completed the Celtic Crossing.

To keep up to date with our other SUP event this year please join the mailing list in the panel below, and if you are interested we still have spaces in the SUP, Prone paddle board and Hawaiian Canoe events, please scroll down for more info on those too. 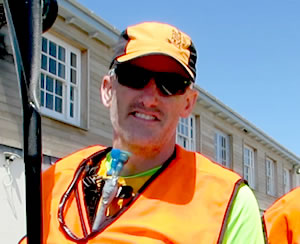 Where you are from?:
Originally from Reading and first got into kayaking at school. Now live in Falmouth in Cornwall but work in London

Where you normally paddle?:
Weekend paddling mainly now – and always on the sea at Falmouth, occasionally making a trip for a down wind run from Lands End or Penzance

Number of years you have been padding?:
Started 30 years ago at school, and got into the marathon and sprint scene. Retired from competitive racing over 20 years ago and now just mainly do paddling for fun, keeping fit and the occasional race

What made you want to do the Celtic Crossing?:
Its one of those things you want to do as a local, and hopefully having done it once, I’ll have more courage to do it potentially on my own (weather permitting!)

How was the crossing?:

The best bit: The occasional runner when you grab a wave and it pushes you at high speed through the mele…and getting the first sight of Long Rock light house

The worst bit: Easily the last 5 miles – when you are limping home, have a lean in the boat, have struggled to really get a flow on the boat due to tiredness and the conditions, your stomach and back and arms ache – and then you get hit from every direction by what can only be described as a maelstrom!

Will you do it again?:
Too early to say – clearly its an amazing experience and challenge – but not that accessible financially. I’m sure I will make the crossing again – just not sure when and whether its as a race. Be great if the numbers start to build at it becomes a serious race as well as a challenge! 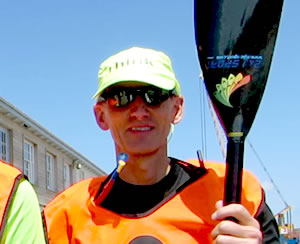 Where you are from?:
Bradford on Avon Kayak Club

Where you normally paddle:
Bradford on Avon and the UK.  Active in marathon mainly and surf ski paddling.

Number of years you have been padding?:
Lots…42 years !

What made you want to do the Celtic Crossing?:
A challenge.  Have done some interesting paddles in my time, in both UK, and abroad and this looked as if it needed adding to the list!

How was the crossing?:
Hard.  Very hard.  The arms stood up surprisingly well….it was the sitting down for so long that caused problems with lower back and bum!  The sea state was ‘exciting’ but not ideal for producing many runners.  The sea state in the last few miles made it very interesting when we were very tired!

The best bit:
Getting out at the end! ( being helped out!! )  The frightening encounter with the large container ship was good, when it was over, and it had safely passed, following our hasty change of course, only 400 mtrs in front of us!

The worst bit:
Back and bum ache and the last 5 miles when the land seemed to keep moving further away from us!!  Some may say the journey out there –  but luckily I do not suffer from being sea sick!

Will you do it again?:
Jury still out!! 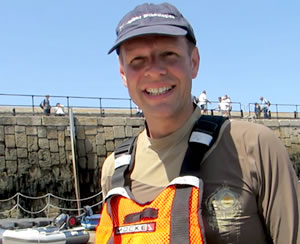 Where you are from?:
South Wales

Number of years you have been padding?:
One, however I have been messing about in boats all my life

What made you want to do the Celtic Crossing?:
The experience and the potential for a screaming 50km downwind run 🙂 Offshore paddling Is completely different from a typical athletic competition, with all the additional variables to consider and plan for, its a fascinating undertaking.

How was the crossing?:
In the conditions we were dealt, it was a tough crossing, every yard had to be earned.

The best bit: Coasting out of the beautiful Scilly Islands and landing on the beach at Sennen cove.

The worst bit: Confronting the tidal race at longships completely worn out after 4hrs+ in the saddle.

Will you do it again?:
It’s already in the diary. 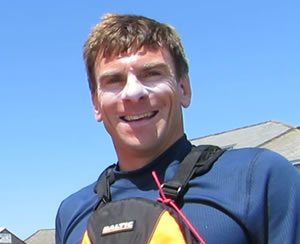 Where you are from?:
Perranporth

Where you normally paddle?:
Perranporth/ Truro (the Fal)

Number of years you have been paddling?:
6

What made you want to do the Celtic Crossing?:
The challenge of it.

How was the crossing?:
Awesome.

The best bit: The whole experience; from the briefings to the Scillonian out to St Mary’s with all the competitors, to paddling round St Mary’s out to open ocean, to the time where we could see no land, several pods of dolphins joining us and jumping out of the water en-route, to the huge ships that passed us, to first seeing land, to watching the miles on the Garmin rack up, sharing the experience with my doubles partner Willam, to crossing the line for huge hugs from my Wife and kids, and pizza/ beer with all the Celtic Crossing crew afterwards!

The worst bit: The last few miles… the red doors of the lifeboat station at Sennen just wouldn’t get any closer, the wind switched direction, the current seemed against us, the temperature dropped as did our speed – it felt like forever to finally do the last few miles.

Will you do it again?:
Definitely 😎 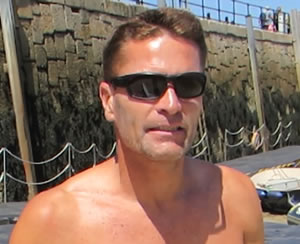 Where you are from?:
Perth

Where you normally paddle?:
Jersey

Number of years you have been padding?:
For a few years 25 years ago, got back into it 7 years ago

What made you want to do the Celtic Crossing?:
Personal and training goal

How was the crossing?:
Found it a tough crossing in ‘confused’ water and hard to get a good relaxed rhythm going

The worst bit: hardly getting any runs at all and feeling ‘stationary’ for the last 90 minutes

The best bit: finding out after no one else got many runs either! And finishing of course

Will you do it again?:
At the finish I thought ‘never again’ now I would be happy to give it another crack! 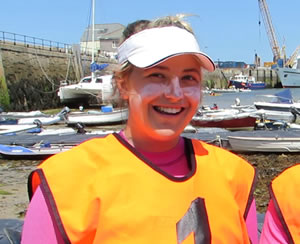 Where you are from?:
Penryn, Cornwall

Number of years you have been padding?:
4

What made you want to do the Celtic Crossing?:
I was at the finish last year with Kiea, we were inspired seeing the paddlers come in, then Glenn gave us the opportunity if we trained for it.

How was the crossing?:
Rougher than expected

The best bit:
Seeing the people on the slip at Sennen

The worst bit: The last 4km after a wave broke over the end of the ski, 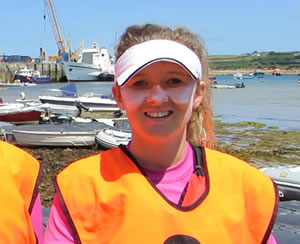 Where you are from?:
St.Ives, Cornwall

Where you normally paddle?:
I train down at Ocean Sports as part of Glenn Eldridge’s Academy squad.

Number of years you have been padding?:
I have only been paddling for 2 years but ski paddling is something I’ve always enjoyed doing.

What made you want to do the Celtic Crossing?:
Watching Glenn and the rest of the team paddling into Sennon Cove last year really inspired me. I then decided this was a challenge I would love to be able to take on myself, making this my goal for 2015.

How was the crossing?:
I enjoyed every second of the Celtic Crossing, even though it was the most challenging thing I have ever done, I don’t regret it one bit!

The best bit: Paddling back into Sennon Cove and seeing all my friends and family waiting and supporting me.

The worst bit: Finally spotting land in the far distance, but not feeling we were getting any closer to it.

Will you do it again?:
I would defiantly love to do the Celtic Crossing again as next time, once I’m a little older, I would like to give it a go in a single ski.