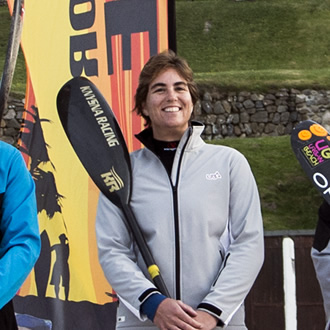 The time was here, and off we went. We were being supported by Jonny Stevenson, an experienced sailor, great navigator and all round good guy! So we had to head out of St Mary’s and paddle around the Island to the front before we could head towards Sennen Cove. Well not as simple as that, the tides and currents are very strong so we had to count that in and then the approaching shipping lane – which is the busiest shipping lane in the UK. I had sat down with Glenn and Jonny and plotted my course, so I was happy. Once you get about an hour away from the Scilly’s and start to lose sight of land it’s not easy to stay on course without a compass or GPS. I had my faithful Garmin and our support boat had a compass, that was pretty much it. I strayed off course a couple of times, but Jonny soon reminded me which direction I should be heading in. Tarryn and I we were combining so well in the boat, everything was great…..we were on the same “page” so to speak.

We passed Mark and Tom (SUP/Paddle Boarder) after about one and a half hours, they were a bit further east than us, so we didn’t see them well enough to ask how they were feeling. Then came our 2 hour mark, the time where you cannot see any land anywhere. Its the most surreal feeling, just open ocean – actually so beautiful words cannot describe the sight of nothing but open ocean. We stopped for a moment, took a picture (of course) but really just needed to take in the beauty and feeling of being out there.

I think that was my high point, besides stepping on dry land that is!! Once we could see land there was a point to aim for, with about an hour or so to go we could actually see the Lighthouse at the end of Land’s End and finally had fixed landmark to aim for. We had a left a bit later than we should from the Scilly’s, so the tides had changed slightly to how I had viewed them on the charts, we could not longer “scoot” inside of the lighthouse but rather aim left of it. This was the hard part…..once we were in line with the lighthouse we hit the current which now had turned against us.

Thank you Tarryn for pushing me through this part and keeping my concentration high. I just remember saying “I don’t know where the harbour is”, Tarryn just said aim for the cliffs, “go closer to the cliffs”, “use the runs”, it wasn’t easy but then suddenly I saw the harbour wall, once you see it from sea its easy but it blends in so well with the land that I just couldn’t make it out…..it was also overcast and almost 8pm by that stage!

WE DID IT!!! We actually made the crossing. A dream of Glenn’s had turned into reality, actually it turned into the most fun and challenging adventure I have ever done. The feeling when we had finished was sheer enjoyment. I had a great time out on the water, thank you Tarryn for asking me to complete this with you, I really enjoyed the challenge. We completed the 52.7km crossing in 4hrs20min32secs, the first ever all female crew to cross this stretch of water on a human powered craft. World record set – another high for me.

Thinking back there were no low points……points where I was tired and would be really happy to for the end to be in sight, but no low points!!