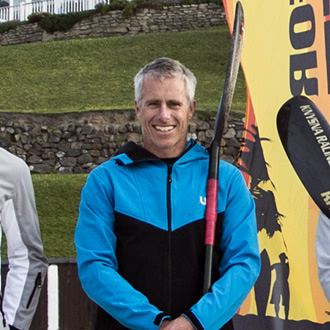 Finally, sitting here on the flybridge of the Carbis Bay Hotel’s Sunseeker it looked like everything was falling into place. Some hidden force was aligning the planets for us, tides, weather and wind were coming together perfectly following the disastrous forecasts from a week ago… In fact things had got alot better in that week, the Skyhawk production team from Newquay had came on board to help capture the event from all angles…Osprey UK had decided what we were doing had the character and ethos that epitomised their company and provided some much needed funds and greatly appreciated kit and to cap it all – here I was styling in the lap of luxury on the Sunseeker, nearing St.Mary’s where white horses were making their merry dance back across the channel towards the mainland, perfect… A week is along time in paddling!

It’s funny, I remember giving Mark a manly man hug before he left saying “mate, enjoy it, we are going to surf our way home”. This one comment soon proved to be my undoing.

At the heart of this event is my desire, passion and drive to experience the ocean, to pit whatever I have against an immense force of nature – not to tame it, but to harness its rhythm and tempo to help me move across its surface with humbled respect and above all speed. To perhaps one day reflect and say, ‘I was alright at that’.

Sunday’s paddle was far from any these things. The moment we entered the water and began our homeward journey, the wind dropped and the swell that had promised to effortlessly surf us back to Sennen disappeared. Using precious energy chasing swells that just wouldn’t pick me up I had seriously over stretched myself for the first half of the paddle and now stripped of my ego mid channel I wondered what on Earth had led me to this point, why do I have to keep on proving myself and to who? But somewhere in a dark corner came a resolute voice quietened by the incandescent doubts and multiple resignations – JUST – KEEP – ON – MOVING.

Having completed this crossing twice before first on a prone paddle board, the second in a double ski the darkest moments always come mid channel. With no navigable point to feedback my desperate need for a nearing land mass any chink in the armour will always be exploited. Leaving my high dose caffeine shot until the very last moment, Bishops rock rose up like an obscure mottled toy overwhelmed by its surroundings. I was passing Tom at this point and screamed at him that there in front of us our final 2km (albeit 10km away) – this was soon to be obliterated by the Dolly P’s skipper, Mike Laity as I grabbed much needed fuel ‘Tom isn’t going to make it in at this rate – we will need to pull him out shortly’.

Shocked, not that Tom could be pulled, but that I hadn’t even noticed the fading light. Fresh with caffeine and a healthy dose of fear that I too might get pulled, I gave what little was left, attempting to glimpse at what lays deep within.

Its amazing what we cling to, for nearly an hour and a half I had listened to myself, kicking me in the nuts, and now I was flying, firstly picking details out on the light house, then block buildings, the break water and then the red door of the lifeboat station. It was almost as if the last two hours languishing in self pity and the calm glassy waters had never occurred! The thing was, I had a score to settle, having set the previous two fastest crossings, I wanted this one for me and I was fast running out of time. Working every bump in the ocean that came my way, I kept telling myself that I could make the last 2km in less than 10 minutes (an almost impossible pace at this point). And then I hit the dropping tide, with the entire North Cornwall coast flooding through a 25m gap at Sennen.

The previous record of four hours and three minutes came and passed – for some reason I still tried to keep gunning it despite the overwhelming shame of failure consuming me. Passing the break water entrance I stopped the Garmin at 4:05.32. As always, a little lip wobble followed by the sight of two tiny people on the beach ‘C’mon daddy…’. 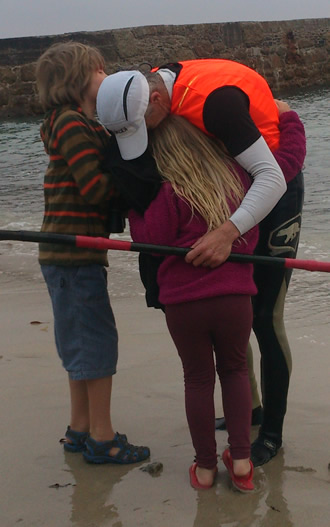