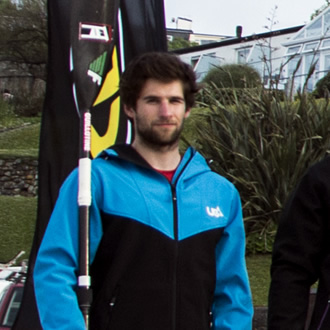 Waking up at Mincarlo B&B overlooking the start line (St Marys harbour) had to be the best way to begin the build up for our departure to the Celtic Sea. We were so well looked after, with beds better than home, delicious breakfast, and enough of it to give us the confidence that we’d made the right move and “filled the tank” the right way.

I could see the flag of the lifeboat station blowing in line with the harbour wall and started to get excited. Earlier I’d worked out from a few maps that the wall points to the North East, so the wind was as good as we could have hoped for. It was like the feeling of knowing the waves are good when you’ve travelled to find them, a feeling of affirmation I suppose.

In the weeks before The Celtic Crossing I’d had a race, some heavy gym sessions, hard work on and off the water and not forgetting work every day. I’d been injured, and that had been weighing heavy on my mind. Would I make it? Luckily I had managed to be creative with training and pull things together. Yoga really helped me, along side using a foam roller to release and flush out trouble areas.

As Vincent and I hit the water for our second ever paddle together on the morning of the crossing (we were trying to iron out some niggles with the fit of the boat) the Carbis Bay Hotel’s boat, Sulis arrived in harbour. It was great to see the faces of all onboard (Vincent, myself and Mark travelled had separately to the other competitors on the Dolly P), it was another box checked and we were well under way. As it happens we got our Fenn Elite Double running just right and comfortably at that. I think it was important to feel this, as it gave us confidence together.

Starting the crossing and trying to ignore the now lifeless flag, which had once given me hope – it felt like this part was almost a formality, this was the “fun” part, the place where we all get to do what we do well. The great thing about paddling is its immersive nature, for that 3 hours 54 minutes 40 seconds I had to be in tune with the ocean, the bizarre performance of everyday life and its worries gone, I had one thing that I’d given myself to do and I was doing it. I love the sea, I love escaping to it and as far as I was concerned, that Sunday I was gone!

Now, not all of that 3:54:40 was quite as positive and soft around the edges as I’ve made out. A solid concrete wall of head wind, counter tide and depleted fuel sources, was run into at about 10km into our 18km “kick for the finish” and when I say “kick” I mean we went way to crazy, pulled over way too many runs and had way too much fun for that 10km! The next 8km was a big old scrape of the bottom of the barrel for both of us in that double. We were still pulling onto runs but it was costing us. As the wind had died for our departure all we had to play with for the whole paddle was a small ground swell, which requires a much higher boat speed to get onto than the local wind chop. I’ll just say we didn’t need the wind and tide against us at that point.

However, arriving at Sennen, a familiar place with familiar voices screaming at us, we picked our selves up for a last surge. Knowing the coast line there really helped, if you know the way the waves and channels work somewhere it’s like a golden ticket, we surfed the last 500 or so meters to the finish quite comfortably in comparison to the hellish 7500m just gone, trying not to cry for the cameras. 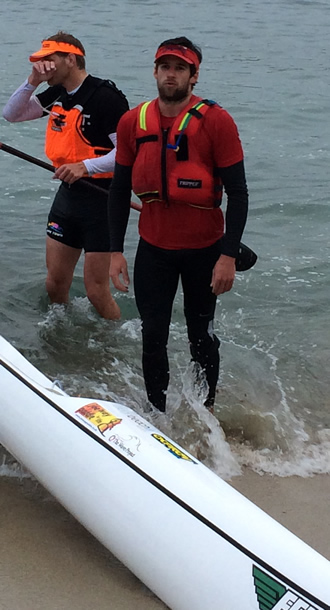