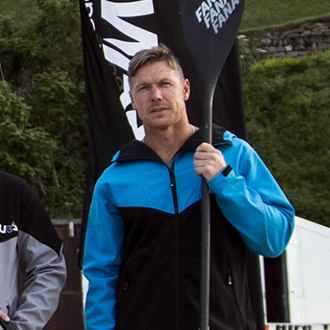 Sunday afternoon and it’s start time, as planned Tom and I hitting the water first (a little later than planned after the interviews with the Skyhawk guys and the usual pre match faf).

For the first hour or so while still paddling through the Scillys we were chatting and taking a few pics, but then as we left the Scillys behind us, things got a little more serious, the joviality stopped and it was constant compass bearings and adjustments to our course from then on. The forecasted wind never materialised and with absolutely nothing whatsoever on the water in front of us I was using the cloud formations to get my compass bearings from. After what seemed like an eternity I started to make out the faint outline of land in front of me. I stopped for a while, let the safety boat catch up and asked if it was ok to push on and leave Tom. I was keeping a slightly better pace and wanted to make a push for Lands End.

I was joined by the Dolly P and for the next hour or so I was feeling OK and fairly strong. But then things started to get a little more taxing, progress seemed painfully slow and I knew that the current was due to turn meaning I would be impeded by the ebbing tide. On the upside I started to be able to make out the white buildings on the cliff at Lands End, which gave me a fixed point to aim for, although they were seemingly getting no closer.

Then the next big breakthrough the lighthouse just off Lands End loomed into view and that became my mission to get level with that and eventually I started to draw close to it, but now with the stronger outgoing current and the waves refracting off the rocks sea state was rather choppy, (to put it mildly!). With my legs in bits I started to fall in more often, and on one occasion after a fall, while getting stood back on the board I tried to balance myself with the paddle, but got caught side on by a wave. With the paddle blade in the water and me still holding the handle I fell and the board broached the paddle shaft. The combined forces snapped it clean in half.

I had a spare but it was on the Sulis, shadowing Tom some way behind. With my legs shot and the cold creeping in and I had to make a choice, pull out or prone paddle for the last 1.5miles – I’d made to within throwing distance of the finish line, it would be a shame not to cross the line under my own steam… so I lay down and got on with it.

At the finish I was well and truly on my last legs, having learnt a very valuable lesson, I was not mentally or physically prepared for what an open ocean crossing like that could throw at me. With having done the Great Glenn Paddle a couple of months before, I was quietly confident I would be OK,  especially with the forecasted steady SW wind on our backs. But in reality it proved far more gruelling than could I ever have imagined. So my little tip is: train and prepare for the worst, then anything less is a bonus.

But it was an amazing adventure to have been part of and I must say a massive thank you to Glenn, Tom and the rest of the team who spent months of hard work and planning to make it all possible. 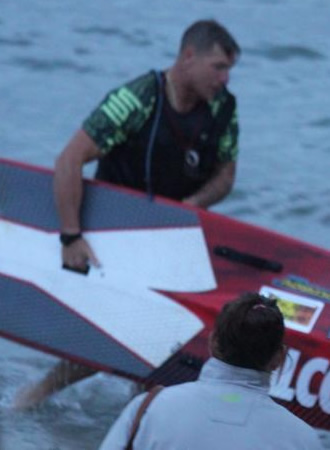