We met in Falmouth marina, and packed 4 athletes, production crew’s from Light & Sound and  Design & Film Cornwall, Steven the owner of the Carbis Bay hotel, his 11 year old son Thomas and our Captain for the day John, onto the Sulis (our support craft for the event) and finally powered out of Falmouth at 8:00am

Arrival on the Isles of Scilly we moored up into St Mary’s harbour. We had driven head on into a small perfect wind swell everyone buzzing, if the wind stayed like this we would catch downwind waves back to the mainland! I was very close to being sea sick, not sure if it was nerves or the sea but couldn’t eat on the way out! After we moored up my stomach settled and on Glenn’s instructions I started to consume a lot of noodles and pasta!

As planned Mark Slater and myself were the first two to leave, off we both went talking along the way taking a few selfies and shooting some GoPro video as we left the island’s. And although all was good, we knew things would get serious pretty quick!

Two hour’s passed, I’d hit one energy gel and taken on about a litre of fluid. All was still good. By this time Mark and I had drifted apart and I realized I couldn’t keep up with his SUP. Mark’s bearing was slightly different to mine. I was about 1 km further North in the channel still close enough to be with the same safety boat to far enough away to feel alone.

I was just under half way and could feel a change in my concentration and approach. In any endurance race you definitely don’t want to focus on the finish too soon, I just really wanted to see the Cornish Coastline. I noticed Tarryn and Chloe passing me about 2km to my North. I could see Glenn’s Ocean Sports UK Red flag strapped to the back of their safety boat. With them so far North I felt I might be too far South meaning Mark was way too far south! I adjusted slightly but pretty much kept on the Easterly bearing hoping the spring tide would push me North and up into Sennen cove!

This was a big hour. I could see the cliffs of Cornwall in front and very distantly some of the Scilly isles behind. My cardio fitness was fine and I had paced myself well, I still had a lot left but the top of my back and lower neck started to hurt! I couldn’t get comfortable on the board. Alternating between paddling on my knees and lying down, I had to rest my forehead on the deck of my board to give my neck a rest. Paddling on my knees for 2 minutes, then lying down for five, I was way faster on my knees but it was a lot harder to balance. Then I cried. I was super proud that I had made it this far and set the ball rolling with the rest of the group for future Celtic Crossing’s! Alone in the middle of the ocean, surrounded by silence. For the first time in my life I was crying with pure happiness!

This was now well into the unknown. I had never trained at this intensity for more than 2.5 hours.  Mark and I had now been dragged too far North with the incoming spring tide and both needed to cut back south into Sennen. 4 miles to go and I hit a new low point… in line with the Longships lighthouse the light was fading fast and the lead safety boat was starting to talk about calling me out… I interrupted the radio conversation and let them know, in no uncertain terms, I would finish and in the dark if needed… Then with 2 miles to go and about 45 minutes before complete dark I hit the counter current Glenn had warned me about. The tide was dragging back at me, a solid mile paddle through two foot chop! I was making no real headway. At this point I sat on my board, turned to my safety boat and gave the cut off sign. That was it, I’d had enough and I wanted out, I didn’t really care about finishing anymore!

My good friend JK who was on the Sulis, and part of the production team, thought I was resting and gave me a “yaaa hooo!” to keep going. This was exactly what I needed, and another 100 meters of the rip and I was free and into semi easy water!

Passing the harbour wall at Sennen, 6 hour’s and 46 minutes after leaving the Scilly’s, was one of the most euphoric moments of my life. I now understand the reason people do endurance  event’s… and after it all it comes down to this: You will never be able to dream yourself into an ideal character, you must hammer and forge yourself into one… I had just finished a little more hammering! 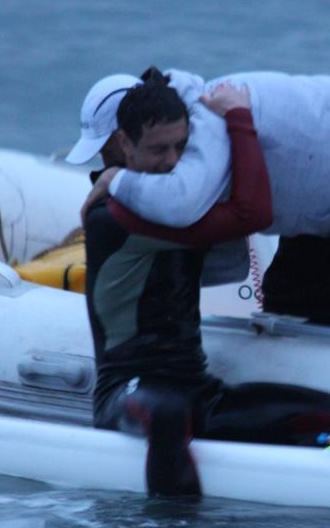