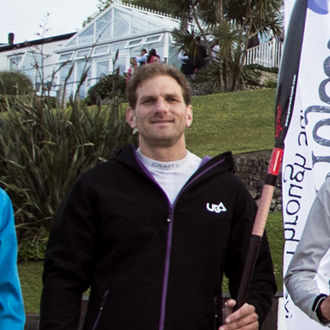 Sunday morning started with a good breakfast at Mincarlo’s. It appeared that we had a lot of time before the start.  The Sulis arrived around 10 o’clock, and with everyone on the island what had seemed like a sea of time, suddenly passed very quickly. In the end we almost ran out of time…  or do they call that stress?

At 2 o’clock, Mark and Tom set off on their boards after we all wished them a lot of luck and strength.  What is a big distance for a surfski to paddle, is even a bigger challenge for a SUP or paddleboard, and we all felt great respect for Mark and Tom going for this!

Chloë and Tarryn were the next to leave, again, we wished the ladies luck and cheered as they started their paddle home.

At 4:30 sharp, Glenn, Lewis, myself and the Dolly P crew left the island.  I felt a great relief to finally be in the boat and paddling out of the harbour, destination Sennen Cove.

It is an awesome experience to paddle towards a destination without having land in sight and being surrounded by so much water makes you wonder about how big the ocean is and how small you actually are.  Remembering what Glenn had told us about the currents, we tried to pick a heading which would give us the biggest advantage without getting too much off course.  Lewis did a great job navigating with only his compass and I checked our progress regularly with the waypoints I had setup in my GPS watch.

The wind was predicted to be a perfect SW to SSW of around 14 knots with gusts to 19 knots in the morning, and dropping towards the evening to around 5 knots.  To start with we had good runs helping us home, however, later on the wind dropped and no longer produced the easy to catch wind chop.  There was still a decent swell out there going in the right direction, but without any wind it took a lot more energy to catch them.  Lewis and I definitely had the advantage over Glenn, with our longer double ski to catch swells compared to Glenn’s shorter single ski we began to maintain a good pace. Big respect to Glenn for organizing an event like this getting us all together, and still being able to compete!  I can only imagine the stress and lack of sleep it took!

After 3 hours we started to pick out the lighthouse and Sennen.  It must have been after 7pm, and started to get dusky.  Sennen was just visible, though the evening haze which had descended and sat over the water making it hard to tell what was sky and what was land.  And it wouldn’t be a challenge if after 50 km everything was still like a bed of roses, and yes: the last few kilometres you start longing for the finish.

10 kilometres before the finish we passed the Sulis. It was now shadowing Mark and Tom so we knew that they still had some distance to cover, in what was by then almost darkness.  We heard that Mark had broken his paddle, but was continuing paddling with his hands and Tom was really starting to suffer… we willed them along as we passed – too far away to shout any encouragement.

It was amazing to finish with such a group of supporters waiting and cheering along the cliff and harbour wall at Sennen Cove, we even managed to get a sprint out to the finish.  My sincere thanks to everyone who was waiting for us at the finish!

Chloë and Tarren had already arrived, congrats to the ladies for their great performance!

It was a great pleasure to have been part of this event, the camaraderie among competitors, organizers and supporters made this first Celtic Crossing an unforgettable and amazing experience.  I think this race has huge potential to become a big event.  Many thanks to the sponsors, supporters and everyone who organized and helped to realize this event!  It’s been great!