Calls started arriving ten days out “you seen the weather, it’s North East…. It’s North West…it’s going to be gale force Southerly…” and all I could say (and hope) is “it’s too far out, forecasts are never accurate this far out”. Five days left and gale force southerlies were still firmly ensconced on the weather chart – if the crossing is to go ahead a cunning plan was needed. The narrowest of windows existed with favourable light to moderate south westerlies combined with a building southerly meant moving the event to Friday. Numerous frantic calls ensued. rearranging ferry tickets, accommodation, videographers and escort crews to all arrive out on the Scilly’s a day ahead of schedule.This is more than a race, more than just crossing an expanse of water. It is an experience of a life time. From the moment paddlers step onto the Scillonian, equipment strapped onto the foredeck craning to see what the coast looks like from out on the water – to rounding St. Mary’s, one of the most amazing archipelagos in the UK. It’s not walk in the part, far from it. To qualify as being an experience of a life time it must also be one of the most testing.

2016 was a strange one, starting with a field of eight for one reason and another only two crews actually made it to the Island for the crossing. Two crews with exceptionally strong motives to continue, which in the grand scheme of things, makes the crossing pale into insignificance. Andy and Lee along with Jack are a group of people drawn together under extraordinary circumstances, a group who would not normally ever come together other than in an obscure race to raise much needed funds and awareness for their respective causes (please follow the links below). It is because of these exceptional people that despite the chaos, poor weather forecasts, mechanical issues and withdrawals the Crossing had to go ahead.

Stepping onto the island is always a relief having driven my trusted 6m RIB out on Thursday, solo. This time, unusually I had time, strolling up the hill from the harbour to check into Penninis Luxury camping was pure pleasure. Scattering charts and tidal flow calculations across the table in front of the log burner final navigational checks were made. With adjusted calculations in hand we set to with the safety briefing accompanied by some pensive looking paddlers.

It is always at this point that I find the enormity of what is soon to unfold is subtly etched across the faces of paddlers and escort crews alike. As one paddler reminded me in 2015 “it’s not making the distance, obviously it is long, it is the navigation, always second guessing whether you have the right line or not deep out in the channel…” And the craggy cliffs that envelop Sennen offer little comfort with only of hints of white sand and shelter from the infamous currents that engulf the peninsula. This was our single biggest concern. Finding a date for the event is always difficult, finding a date with minimal clashes and the best tide almost impossible.

Holding the event on Saturday was always going to be a push in terms of tides. Moving to Friday put us in the raw teeth of the counter current leaving Sennen as the paddlers attempt to scratch their way shoreward. The only solution was leave before the crack of dawn and to exit via the northern entrance of St. Mary’s which in itself offered new problems. 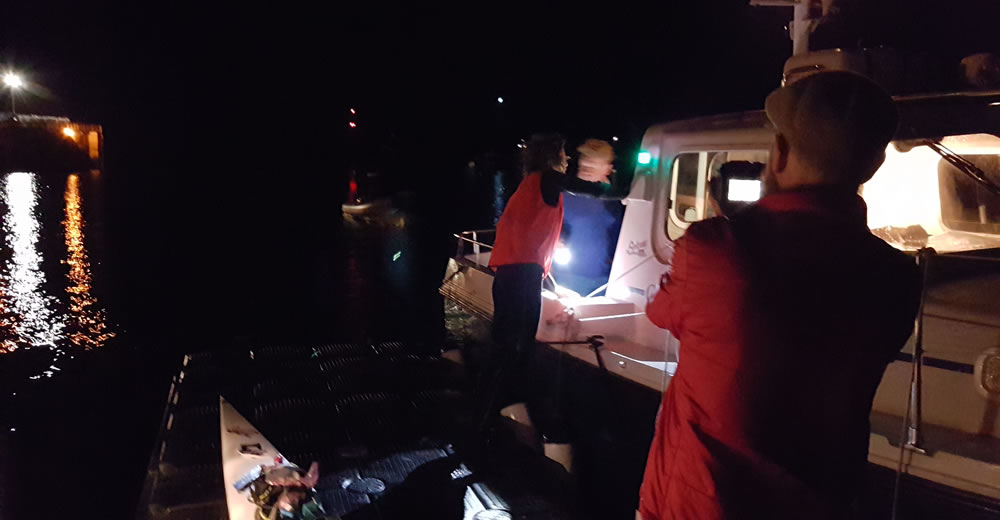 Leaving the Scilly’s is not a straightforward affair – particularly at that time in the dark. The channel is littered with wrecks, paddlers are able to deftly nip around them but the escort boats are greeted almost immediately by them when immerging from the safe haven of the new quay. The walls of the Atlantic pub pay an unnerving tribute to a myriad of black and white pictures depicting scores of stricken vessels strewn across various rocky headlands and other wrecks themselves – which is a little unnerving to say the least!

Escort crews were up at 4am and prepping their craft ready to leave as close to 5am as possible. The harbour was eerily quiet with only the frenetic activity of a few scurrying along in the shadows. As we left the entrance it dawned upon me that almost a year ago that Andy had approached me asking if I thought he and his son, Lee, being none paddlers, would be able to make the Crossing? Knowing how challenging the Crossing is a polite ‘yes, but maybe next year…’ response would follow. But in this instance aside from the huge personal upsets that have befallen Andy’s family, he had a look in his eye that spoke volumes. It was clear that this mild mannered man not only possess the determination but the capability to make the crossing in 2016.

The enormity of the mammoth undertaking is difficult to fully comprehend given that both Andy and Lee had only previously paddled plastic kayaks – and I am not sure they did either. After hundreds of hours’ practice enduring numb bums and dead legs the duo where now at the business end of a very long day. With lights flashing and florescent buoyancy aids lit up by various head torches the pair gingerly edged their way out from the island into the Celtic Crossing followed in close proximity by Jack Coope on this 17ft prone paddle board and a pod of Dolphins.

Similarly, Jack popped down to the Ocean Sports Centre at Carbis Bay and asked if I thought he would also make it across on a paddle board with only four months until the event. Jack, it appears is hewn from a similar cloth, although worlds apart. A local surfer with a penchant for extreme endurance activities and an grizzled determination. Something which would stand him in good stead when two weeks out a potentially critical injury interrupted his training.

Unable to knee paddle on his board (a more powerful and efficient method of paddling) due to a chronically enflamed bursur of the knee, Jack was restricted to laying on his belly throughout the crossing.

Two very different motives drove these three together for an epic crossing. With something like this there is a huge emotional investment and it is difficult to watch sometimes as a support crew – passively watching the slow and inevitable break down of a person to where only raw inner strength can bring you home. What makes the crossing the more than an endurance events it that there are so many special moments crammed into a finite amount of time, Dolphins surfaced almost immediately as the tiny group exited the channel into open water, the deep cobalt blue of the breaking dawn giving way to a fiery red on the eastern horizon foretelling imminent change adding a greater sense of jeopardy.

Seeing marker buoys being pulled under water mid channel as if some omnipotent force were pushing everything northward (which it was!). Or how the crystal clear turquoise waters of the finish belay the torrent that lay beyond. To see the inextricable father and son bond glow as both Andy and Lee stood on the sand relieved and shattered. The wave of raw emotion emanating from some dark place wash fleetingly over Jacks weary face.

From a purely voyeuristic stand point to witness the depth of a person’s determination triumph; to keep going when all you really want to do is stop is an honour to be a small part of. All of this combines to make the Celtic Crossing a very special moment in time. One which only upon reflection does its enormity fully come home. 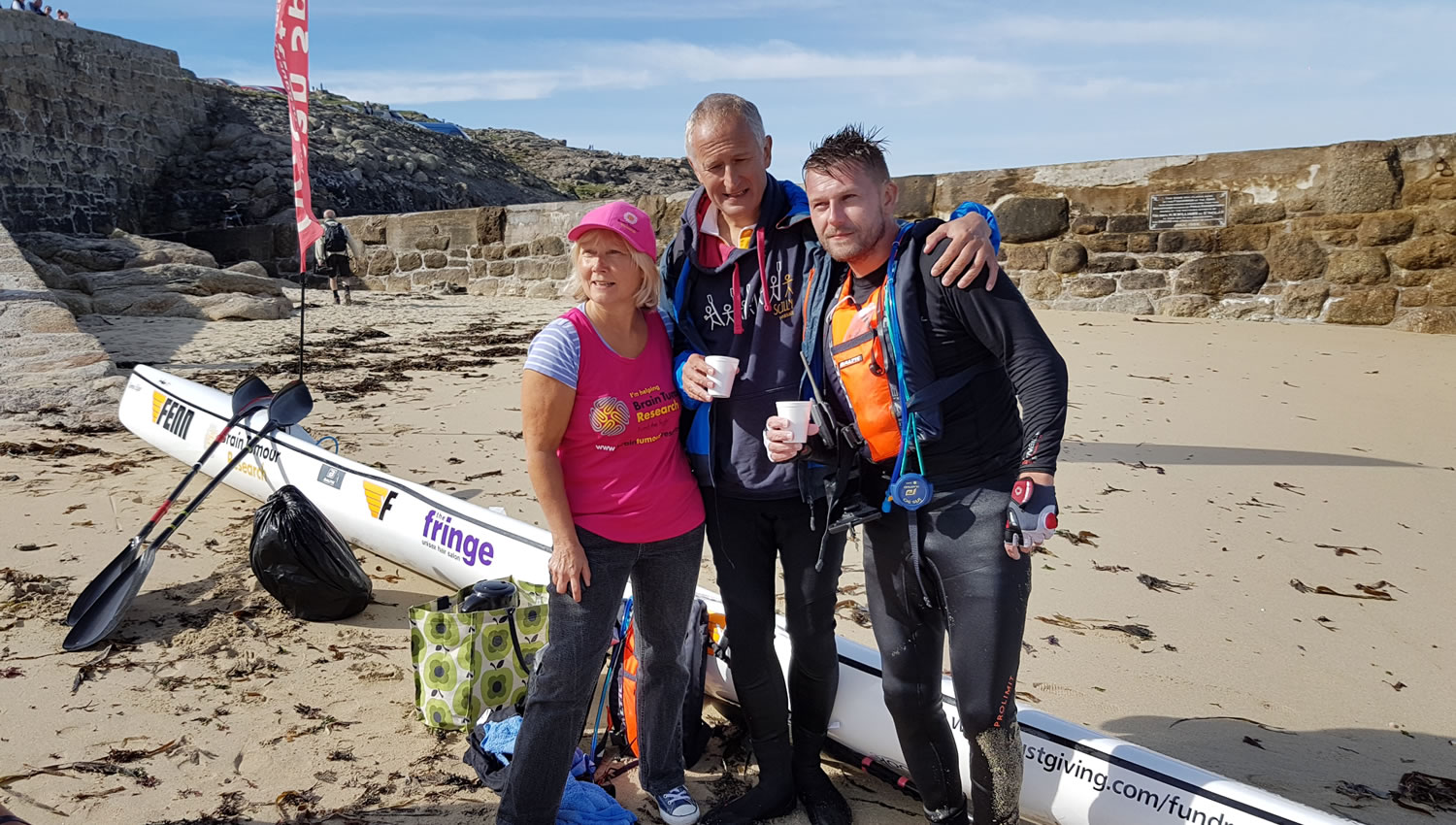 The 2016 Celtic Crossing was run to support these 2 great charities: