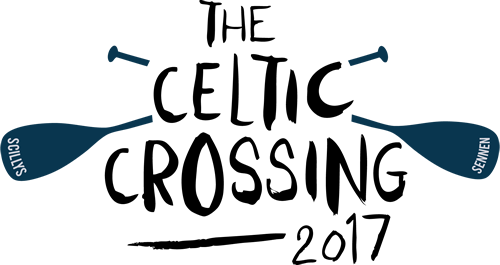 Bluefin Tuna, Over falls and crossing in the dark!

2017 was a strange year, flaming June was actually flaming, for once, August was pants and a huge amount of north westerly winds befell a decidedly average British summer, all of which wreaked havoc with running the event this year.

After a decidedly windy September, mostly from the north, organisers had to move the original start date from September 16th to October 21st. In an ironically bitter twist, after having icy winds arrive plumb out of the North, winds swung into the South West for an ideal crossing unfortunately, wind speeds and swell size were way over safety limits at 28 knots gusting 35 with a four metre and 14 second swell period.  For a second time the Crossing had to be rescheduled. The impact of which was to affect one paddler more than most.

All bar one paddler was able to confirm attendance for the new 2018 date (May 12th) but stand up paddler Ben Fisher was about to take a third hit missing the crossing. Event organiser Glenn Eldridge had this to say “we are keenly aware of the huge undertaking it is for paddlers signing up to the Celtic Crossing both in committing to training time and finances, wherever possible we try our upmost to ensure we can get people across, safely. For Ben however, he was unable to make the new date for 2018 making it the third time he would have missed his chance to make the crossing after, injury and illness over the two previous years”. 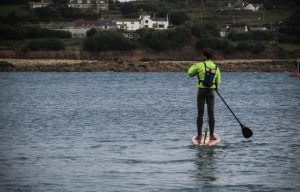 “We really felt for him” said Glenn “the only way we could get him across was to make a Bandit Run in one day”. It is a decision not taken lightly. The Celtic Crossing is an immense challenge, both for paddlers as well as escort boat crews, which is why it is scheduled over two days. Long time event supporter and digital designer Johnnie Wells had his reservations “we have done it before in one day and it nearly broke us (escort crews). If the conditions are good for the paddlers then the escort crews have to steam out into it first. It is more than an uncomfortable ride; the swells can be really big out in deep water and we take an absolute pounding”. The last time a one day event was attempted it nearly ended in disaster after escort crews narrowly made it to the Scilly’s. Having left St’Ives for the Islands, after two and half hours of bashing into head high swells the small fleet of boats had to take shelter at Sennen Cove lifeboat station; nearly ten nautical miles off course. After refuelling and a reduced ebb tide, the crews made a second attempt to break into the deeper waters of the Atlantic channel. A further two and half hours later escort crews reached the Scilly’s. With only enough time to refuel the boats, paddlers and crews turned around and headed straight back to Sennen. “In total, we were on the water for nearly 13 hours straight that day not only that we had to face the Runnel stones at full flood! Not something we were keen to tackle again” said Johnnie.

In spite of the risks, the Bandit Run was given a green light. November 13th was the new date, yet even still it seemed the Gods were conspiring against running the Crossing, and it was pushed back one further day to the Tuesday. At 5:30AM Ben made for a solitary figure standing in the dark on Carbis Bay beach, with board and multiple bags strewn in the darkness around him. Driving out to the Scilly’s is no mean undertaking from anywhere on the Cornish coast but to do so in darkness into a 13 knot south westerly on an ebb tide, some might say is foolhardy. Conditions were going to make for an uncomfortable journey for the crew, Ben more so, with wind over tide and multiple overfalls along the coast. “Within 10 minutes I knew we were going to be in for a kicking” said Glenn as they rounded the Island, “spotting swells in the dark for the first hour was going to be a challenging to say the least but, when we at first moved out wide past the Island and then Clodgy I soon realised a three hour crossing was going to be overly optimistic!”. With minimal recuperation after nearly four hours of relentlessly hitting ocean swells to then turn around and paddle back, was going to be an even taller order for Ben.

Food swiftly scoffed and hydration pack donned Ben struck out from St’Mary’s after only 30 minutes of respite. Early on, small swells were lining up perfectly, after 90 minutes Ben was starting to feel the full force of the Atlantic with chest high swells pushing him toward the Cornish coast. As par for the course the wheels start to wobble at the beginning of the traffic separation scheme (TSS), “to be fair, given when we started this morning I’m surprised that they didn’t come off sooner!” said Glenn.

More fuel, hydration and a brief course logistics update Ben refocused with land in sight. “this is the bit I feel the most pressure, as a paddler I know how important it is to have faith that your crew is steering you on the right course. As the coast starts to loam above the horizon there are no clearly discernible features other than a hill or two!

I’m constantly taking course plots to make sure that we are not only heading toward the correct part of the opaque landmass but we have taken into account the currents and wind along the way. This year with Ben, I felt we possibly had the best line so far and leaving on a different tide really seemed to pay off”. Nonetheless, a plotting a good course still does not do the paddling for you and Ben was grittily plugging away. “We’ve always found that the last 15km are the hardest” said Johnnie “you’re always desperate to find features that confirm you have judged the counter current correctly. First buildings on the cliff tops and then the fabled red door of the Lifeboat station starts to take shape and fill in with colour but never really seems to get any nearer”.

Knuckling down Ben ground out the last ten kilometres with his usual steely quiet reserve. After nearly five hours things were becoming a monotonous grind, in a flash this was to change as the crew sighted a Bluefin tuna, breaching it nearly knocking Ben off his board. Throwing Johnnie, the GoPro the crew managed only to capture its tail as it breached for a second time. “We were stunned, I have never seen anything like it before. Seeing pods of dolphins etc. are pretty much obligatory when we make this trip but a Tuna, that’s crazy!” Left pondering what might be chasing the big fish, sights were firmly set on getting safely into Sennen.

Nearing Cowloe, solid head high waves were breaking, forcing Ben wide making the last 800m more difficult with swell hitting Ben broadside. Finishing in five hours fifty four minutes was an exceptional effort. Having crossed the finish line stating in his typically unassuming manner Ben said, “I’m happy with that” upon hearing his time. No doubt this was an immense effort by Ben, while marginally outside of the fastest time set by Paul Simmons in 2016, no one has had to deal such challenging conditions on the way out and to immediately turning around and paddling back. One is left wondering how fast he could have done it had Ben been able to make the crossing over two days?

Grabbing a welcome cuppa on the beach and pasty on the quayside the adventure was far from over for the 2017 Bandit Run. Light at this time of year is in scant supply, having been delayed after making heavy weather out to the Scilly’s precious few minutes were left for the final return leg back up to St’Ives. More importantly, with the Brisons to be negotiated, the safety crew desperately set off in an attempt to clear the notorious overfalls, where swells jack up alarmingly to more than twice their normal height. “It felt like we were chasing avalanches as our bow plunged into each trough” said Johnnie; “each wave became progressively bigger and darker in the fading light so that in the end all we could see were these overhead dark masses of water standing up behind us”, “the noise was terrifying” said Glenn in agreement. In all, the Bandit Run proved to be a real success “while challenging” said Glenn “it is something we can definitely explore in future years if people can’t make the main event, it is feasible on the right tide and conditions, to do it in a day. Although, not for the faint hearted it is food for thought.

A huge thank you to Johnnie Wells of Meor Design for always being ready for the challenge and the Ocean Sports Centre for the use of its safety boat and resources each year.